How to Reject Bad Companies for Investment 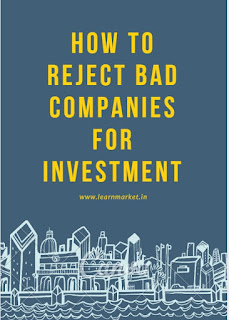 Difficult to pick the companies for investment that can give good returns for year and years. But we can easily to reject the bad ones that can destroy our wealth. Not investing in a super good company will not destroy your capital but investing in a bad company can definitely destroy capital. Therefore it’s necessary that we do not invest our hard earned money in bad firms
Below are some quick ways to filter out the bad companies.
Reject IPO (Initial public offering)
Now a day’s all IPOs are overpriced. A company sells a share to the public only when they will get the high price. Moreover, most of the new listings are young firms which have a short track record. Investment is safe in companies that have a solid track record of good performance for years.
Reject the company which doesn’t keep investors updated
The company has to regularly update the investors by publishing quarterly and annual reports. These reports are available on the company website and also on BSE. If the company is not publishing its performance reports, it’s hiding valuable information, reject such companies.
Reject the companies with negative operating profit
Why should we invest in a firm which is not making the profit? Of course, there can be turnaround companies, many companies turn profitable after being in a loss for years. The probability of any company to turn profitable which is in the loss for years is very less. Also, you have to do a lot of research to make sure that the company can actually turn profitable which is not possible for a common investor. On the safer side, it’s better to reject such companies. Also, avoid companies whose profits are going down year on year.
Reject companies with volatile earnings growth
Best companies are stable and post consistent profit growth. If the earning are fluctuating then the company might be either operating in an extremely volatile industry or is regularly getting hit by competitors.
Reject companies with negative cash flow from operations
Cash flow is the actual number which tells how much cash the company has generated from its business. There can be some good companies whose cash flow becomes negative when they are heavily doing capital expenditure in projects that can generate good returns in future. Companies with negative cash flow require additional funding, which is done through debt or by selling additional shares. More debt makes the business risky and additional share selling dilutes your ownership skate as a shareholder.
Reject companies with very high financial leverage
Companies with a lot of debt require extra care because their capital structures are often very complicated.  I prefer to reject the companies having financial leverage ratio above 4. It’s good to reject companies with interest coverage ratio below 5.  Companies whose debt is increasing but sales and earnings are reducing should be avoided.
Not paying taxes
A company whose profits are increasing but it’s not paying taxes or paying too less is avoided because the probability of the earning being fake is high in such cases
Reject companies consistently diluting shares
If the company is issuing continuously new shares or granting stock options to employees and executives in the good amount it’s a red signal. If the number of shares outstanding is consistently increasing by 2% per year and it is not doing any big acquisition avoid it. Increase in the number of shares is good for shareholders.
Reject companies with ROE consistently below 10
We invest in equities to generate more income than risk-free fixed income assets like bonds or fixed Deposit. Return on equity is a financial ratio every investor should know this ratio tells the return company is generating on the shareholder’s money. For financial firms minimum, ROE should be 12 as their business is leverage based.
The formula for ROE is
ROE = Net margin x Asset turnover x financial leverage
Therefore a company can post a better ROE either by selling its goods or services at higher margins or by making efficient use of its assets or by putting leveraged money into a business.  A 15% ROE generated with minimal leverage is a much higher quality result than the one generated with more leverage.
These a quick ways to filter out the bad companies. There is always the possibility that a bad company of today may become a good company of future. Finding such companies is tough for a common investor. So to have a good merging of safety in your investments it’s better to go with the ones which have a good track record of profitability.
TO LEARN BASICS OF SHARE MARKET