Skip to content
Peter Lynch: The greatest investor of all Time 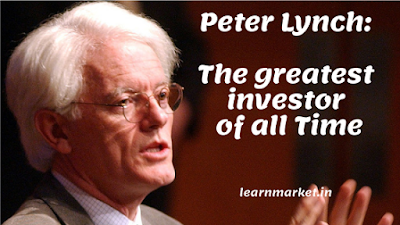 Peter Lynch (born January 19, 1944) is an American investor, mutual fund manager, and philanthropist. He was a fund manager of Fidelity’s Magellan Fund. He ran this mutual fund for nearly 13 years. During this period (1977 to 1990), the mutual fund gave annualized return of 29.2% per annum. At the age of 46 year, Peter Lynch retired from Fidelity’s.
Peter Lynch, in 1955, when was 11 years of age, he first got exposure to stock market. In that age Peter Lynch worked as an attendant to corporate golfers. These people were all well paid highly successful people. While playing golf they used to share their experience of stock market. The names of stocks that Peter Lynch heard from the golfers made no meaning to him. He used to go back home and used to search for them in newspapers. He used to feel excited seeing the price of these particular stocks going up in times to come. Peter Lynch first stocks were bought when he was in college. He bought stocks of a freight carrier company called Flying Tiger. After he bought this stock, it price went up several folds. In 1960’s Vietnam War was in full flow. During those times Flying Tiger planes were used to carry soldiers. The appreciation of Flying Tiger’s stocks was phenomenal. This gave a huge personal boost to Peter Lynch. It framed Peter Lynch’s first steps to become a stock market guru.
Peter Lynch first coined the word ‘Ten Bagger Stocks’. When the market price grows to ten times the purchased price, the term was used. Peter Lynch believed that in order to get successful in market one need only few ten bagger stocks. For sure in a lifetime one will not find many Ten Bagger stocks. Peter used to focus on buying mostly Ten Bagger stocks. For sure, not every stocks he bought used to perform big but those Ten Baggers used to compensate. Peter Lynch says it is not that ten bagger stocks are too few. In fact he believes that there are many listed in stocks exchange. Only if we get hold of couple of them we can be a winner. Peter Lynch says, while investing money, even if you are right 6 times out of 10 you will be considered excellent.

So not all times you selected stocks will perform. It is only those few ten baggers that will compensate for the mistake. A calculated risk is what investors shall take while investing.
Peter Lynch believes that timing is important in stock market investments. Lot of people go in and go out from market in wrong times. In Middle of 1960’s Peter Lynch joined Fidelity. He was paid just $1300 per month. In his second year in Fidelity he was paid $1400 per month. Peter Lynch used to work as Market Analyst. He was just 25 years of age when he joined Fidelity. By his age Peter Lynch was earning quite well. After around 8 years of working in Fidelity that Peter Lynch got Magellan Fund. He was almost 33 years of age and still quite young to be a fund manager.
Also Read – Warren Buffett the Great Investor
When Peter Lynch took over Magellan in 1977 its asset value was close to $20 million. Magellan Fund was basically a growth fund which was mostly investing in domestic market. While managing Magellan Fund, Peter Lynch’s philosophy was clear. Peter Lynch used to research his stocks on his own.
Peter Lynch used to research many stocks as possible and picks the best 10% stocks. Idea was to selecting a good stocks which have great future prospects. When Peter Lynch bought Taco Bell who knew about this small restaurant chain? Peter Lynch accumulated some quality stocks in Magellan’s Portfolio. As a result by 1983 Magellan’s asset value was close to $1 billion.
Peter Lynch made mutual funds bigger and bigger.
In early 1980’s Mutual Funds were not as popular as today. Today, television news channels have dedicated reporters who focus only on mutual funds. Mutual Fund was not such a big hit back then. It was only stocks-stocks that people, print media, TV used to talk about. The situation changed when people were forced to think about their future. Till then government used to take the burden of Pension of retired people. People used to retire with a comfort that government will take care of them. But things changed when people started needing more money. Government dependency also became less. People started gaining more financial literacy. It was after then that mutual fund industry saw dramatic growth. With Fund Managers like Peter Lynch present to prove the worth of Funds, there was no looking back.
There was a market crash in 1987. Peter Lynch was still in Magellan at that time. He said that he was well prepared for the crash of 1987. During the market crash of 1987, Peter Lynch took a long vacation. There is a way to deal stock market crash. Getting panic and selling all holdings is the last think one shall do.
Magellan Fund asset value became one third after the crash. But Peter Lynch says “I wasn’t that scary because I concentrate on fundamentals”. Peter Lynch used to invest in companies by looking at their balance sheets and profit and loss accounts. He says, “I look at their business”. I look at the environment” before buying their stocks.
Advice for small investors from Peter Lynch
Peter Lynch believes that a small investor is as strong as a pro. The only thing that small investors fail to do is stock research. They do extensive research while buying house, furniture, car etc. But they buy stocks blindly on advice of others. Buying stocks of company which has decreasing sales and earnings is a mistake of investor. One cannot put blame on the market for this mistake. Peter Lynch says that a common man can do three things:
§  Avoid stocks all together.
§  Buy stocks directly or,
§  Buy them through mutual funds.
What Peter suggests for small investors to select mutual fund as their preferred investment vehicle. In parallel, one can invest directly in stocks. Everyone is acquainted with at least four or five companies. Better is to keep tracking these few companies regularly, and when opportunity comes buy their stocks.
Book- Learn To Earn By Peter Lynch. 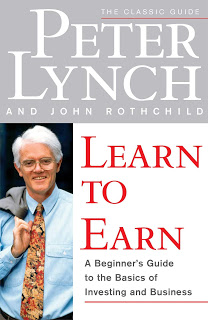