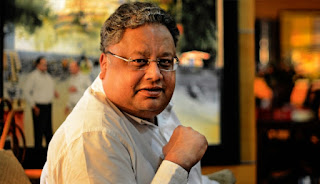 Rakesh Jhunjhunwala, aged 60 is a successful equity investor and trader in India. Recently Forbes reported that he is the 54th richest citizen of India, with a net worth of 4.6$ Billion.

He is professionally a Chartered Accountant that practice in his own firm to manage his own portfolio being a partner in an asset management firm. Rakesh Jhunjhunwala along with his wife Rekha Jhunjhunwala owns firm naming “Rare Enterprise”.

Rakesh Jhunjhunwala was born in Mumbai on 5th July 1960. He was born in a middle-class family. His father was an Income tax officer and stock market investor.

Rakesh Jhunjhunwala started reading a stock market column in the newspaper with fascination. During the initial stage of their life, he decided to make a career in the stock market.

Before entering the stock market, he completed his graduation in commerce from Sydenham College. After commerce graduation, he enrolled himself in ICA and became a Chartered accountant in 1984.

After completion of CA, he expressed his wish to become a stock market investor to his father. This type of move was unorthodox and unacceptable to most people, but his father was democratic, he reacted differently by telling him that he can start a career in the stock market, however, he would not support him financially in this endeavor. He further advises him that never take any shortcuts and never forget that “Your word is your bonding”.

Rakesh Jhunjhunwala started stock market investment in the year 1985. He started his career with a small capital of 5000 Rs/- At that time BSE Sensex was at level 150. He was knowing that such small capital will not help him in the stock market. In order to get capital, Rakesh Junjhunwala approached his brother and was able to raise capital of 1.5 million. With this capital, in a short span of 1 year, he earned nearly 1 million and invested this profit in 5,000 shares of Tata Power. He realized that trading is the only option for him to earn big money from the stock market. He started trading in stocks. He purchased Sesa Goa and Telco Stock. These stocks had generated a good return for him. There are a lot of stocks that made large sums of money for him like Lupin, Titan, crisil, etc.

Today his Portfolio is worth over USD 3.2 B which consists of Titan, Lupin, CRISIL as a top holding now.

6 thoughts on “Rakesh Jhunjhunwala Success Story from 5K to 54 Richest Person In India.”