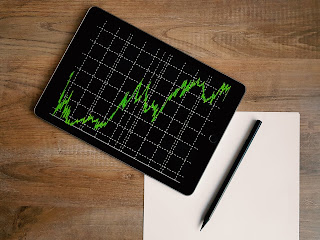 Use technical analysis indicators to increase your investment returns. There are 100s of technical Indicator available in the market out of these top 5 technical indicators are Follows:

Moving averages are a core part of technical analysis. Moving averages filter out
the noise of stock chart by smoothing out price action. The most reliable moving
Averages are: Simple Moving Averages: 7, 13, 20, 50, 100, and 200 day
Moving averages provide support for falling prices and resistance for rising prices.
For investors and long-term trend followers, the 200-day, 100-day, and 50-day. Simple moving average popular choice.
See the illustration below. 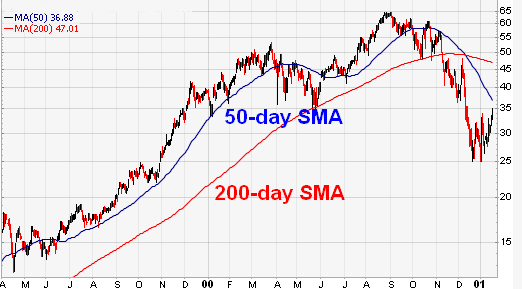 Moving averages are lagging indicators as they are based on the previous price. As a result, the longer the moving average the greater the lag. Therefore, a 200-day average will lag a 20 day.
BOLLINGER BANDS

Bollinger Bands, one of the most popular indicators, is an envelope around stock price indicating the price range of the stock based on stock volatility. When price moves towards upper band it is often considered as overbought and when it is near lower range it is considered as oversold. Typically, a 20-day simple moving average is used, although this can easily be changed. Volatility is taken into account by also evaluating the standard deviation of price change.

Standard Deviation: think of this as the average difference between the price of the asset and its mean over the specified time period.
The greater is the standard deviation, the larger have been price movements, signifying price volatility.
Bollinger Band indicates volatility around the price of a stock. When the price reaches upper band it is considered as overbought and could be a good exit point and when stock approaches lower band it is considered as a good entry point. These are highs/lows or support and resistance. When a stock has high price fluctuation the band expands and when volatility is low they contract to adjust with a change in price volatility.

In Normal distribution, 68% of the time price should be within one standard deviation and 95% of the time it should be within two standard deviation
Usages of Bollinger Band
a. They provide excellent support and resistance in the sideways market.
b. They can be used for to determine trend reversal. When a stock breaks the upper band and stay above it for few trading sessions then it is considered to be bullish and when stock breaks lower band and stays below for some trading sessions bearish signal is generated.
c. In a strong bullish cycle when the stock is moving along with the upper band and then moves towards middle band it can be considered as bullish trend reversal. In the same way when a stock is moving lower band and then moves towards middle bearish trend reversal can be detected.
d. They give a very good idea of the volatility of the stock. The wider the band the more volatility it has.
e. A very narrowing band means indecision on price movement and a possible break out is imminent.

RSI calculates the strength of the stock trend and helps to predict their reversals. RSI value oscillates between 0 to 100. RSI ABOVE 50 = BULLISH MOMENTUM
RSI of BELOW 50 = BEARISH MOMENTUM. As per Wilder when RSI value is above 70 its is considered as overbought and when RSI is below 30 it is considered as oversold. Some traders use 75/25 or even 80/20 to define overbought and oversold.


SAR stands for ‘stop-and-reversal’. Parabolic SAR (PSAR) indicates entry and exit, or long and short, points in stock trends. PSAR is a momentum indicator. In the chart, the dots following the stock price is the Parabolic SAR. 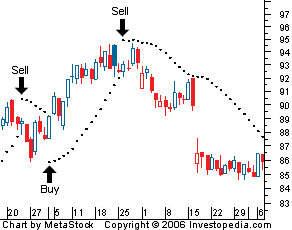 The upward sloping dots below the price reflect bullish momentum. Dots above the price Trend downward reflecting bearish momentum.
BUY WHEN PSAR MOVES FROM ABOVE STOCK
PRICE TO BELOW
SELL WHEN PSAR MOVES FROM BELOW STOCK
PRICE TO ABOVE
PSAR does have a trick up its sleeve; you have to be careful with BUY signals. This mostly applies to stocks that have been trading in a narrow range. This price

action can give false PSAR signals.


MACD stands for Moving Average Convergence and Divergence. MACD is a calculated by subtracting fast Exponential Moving Average and a Slow Exponential Moving Average. These average moves towards and away from each other and hence the name was given as Moving Average Convergence and Divergence. Mr. Gerald Appel invented MACD in the late 1970s. MACD is so popular because it is one of the most reliable and easy to use technical indicator. Even though it is lagging indicator, it provides a signal before moving average crossover. MACD gives a signal for trend continuation and reversal, therefore, used both by bulls and bears.

The major component of MACD
1. MACD line. Its a graphical representation of difference of fast exponential moving average and slower Exponential moving average.
2. MACD Signal line is 9 period EMA of the MACD line.
3. Zero Line. It is constant line with default zero line. It also acts as a signal line.
4. MACD Histogram- It is a plot of the difference between MACD line and a signal line.
How to use MACD
There are three different indicators in MACD that provides a signal to the technical analyst. They are:
1. MACD and signal line crossover. When MACD line moves above Signal line a Buy signal is generated.
Aggressive traders may jump at this point. This is easy to spot and its occurrence is also quite common but a decision based alone on this indicator may lead to losses. This signal should be verified by other indicators. If after this indicator if MACD crosses above zero line then it’s reliability is considered better.
2. MACD moving above zero line. When MACD line crosses above zero line buy signal is generated. This is equivalent to 12 day EMA crosses above 26 EMA. Reliability of this is better than MACD and signal line crossover.
3. MACD and price divergence. When a price is making higher highs and higher lows and MACD is making lower highs and lower lows, a trend reversal is generated. This is one of the rarest signal spotted of all MACD signal. MACD price divergence is one of the most reliable signals.